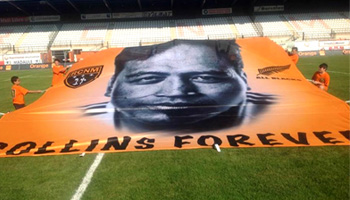 Narbonne players and fans have paid tribute to the late Jerry Collins in their opening game of the season in the PRO D2, the French second division. Collins was contracted to the club when he tragically died in a car crash two months ago.

There have been a number of tributes since the tragic event took place, in which Collins’ partner Alana Madill also died, but this was the first real chance for the Narbonne team and fans to pay their respects publicly.

The Narbonne team and supporters club came together to create the giant jersey and a video tribute, as well as a minutes silence, then a stirring prematch Haka.

“Jerry and Alana meant a lot to the team and the boys wanted to pay their respects,” said former Wallabies loose forward, Rocky Elsom.

“Doing a haka for the first time, live on television and in front of a packed house for a mate that has passed away is not an easy thing to do. I’d also like to thank the supporters club (of Narbonne) for their support of the Collins and Madill families over the past months.

“You (the supporter’s club) have represented Narbonne well and done all you could to assist in what has been a very a difficult period.”

Collins wasn’t at the club very long but he clearly made an impact. The banner made by fans reads “Collins Forever”, and although you can’t see it below, the Haka was actually faced by Aix en Provence, as can be seen in a second video on page two of this post.

The 7m wide by 6m supporters banner was reportedly put together by as many as 50 people, who spent a whole month making it in Collins’ honour.

Meanwhile daughter Ayla, who survived the crash thanks to Collins shielding her on impact, is in Canada with her maternal grandparents. She continues to develop and grow despite the awful nature of her injuries. Doctors say they are unsure about possible long term complications. Collins’ parents recently flew over to spend time with her.

You can still donate to the Jerry Collins Memorial Fund that was set up after the accident and has already raised over $50 000 to support little Ayla.

The All Blacks are set to debut their new jerseys against the Wallabies in the opening Bledisloe Cup test this weekend.