Joe Launchbury smashes Luther Burrell with 'humdinger' of a tackle 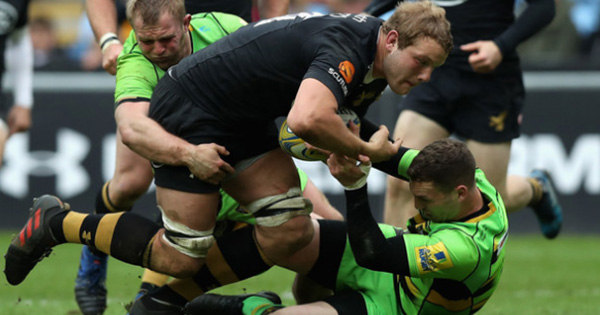 Wasps lock Joe Launchbury put in a crunching tackle on Luther Burrell on Sunday, knocking the centre clear off his feet. It was a clean hit and just what Wasps needed to set the tone for victory and an Aviva Premiership play-off berth.

Saints looked to get things going from deep in their own half when Burrell tried to make a break off a nice offload from fullback Ahsee Tuala, only to find himself smothered and levelled by the big lock. Moments later, Wasps collected a penalty stemming from the jarring hit.

Things did get tough late for the third-place Wasps after Northampton clawed their way back and made Wasps earn their berth. However, with two tries to Christian Wade and one from both Elliot Daly and Juan de Jongh, Wasps were too strong in the end.

Meanwhile, James Haskell was penalized for a questionable high tackle late in the match, which led him to label the sport “pathetic” in a post-match interview.

“I don’t know what’s happened to rugby? It sounds like I’m fading out at the right time, it’s becoming a bit of a pathetic sport at the moment.”

James Haskell. No. Holding. Back.

Wasps have now booked their spot in the playoffs with the 36-29 win on the back of a commanding Man of the Match performance by Danny Cipriani.