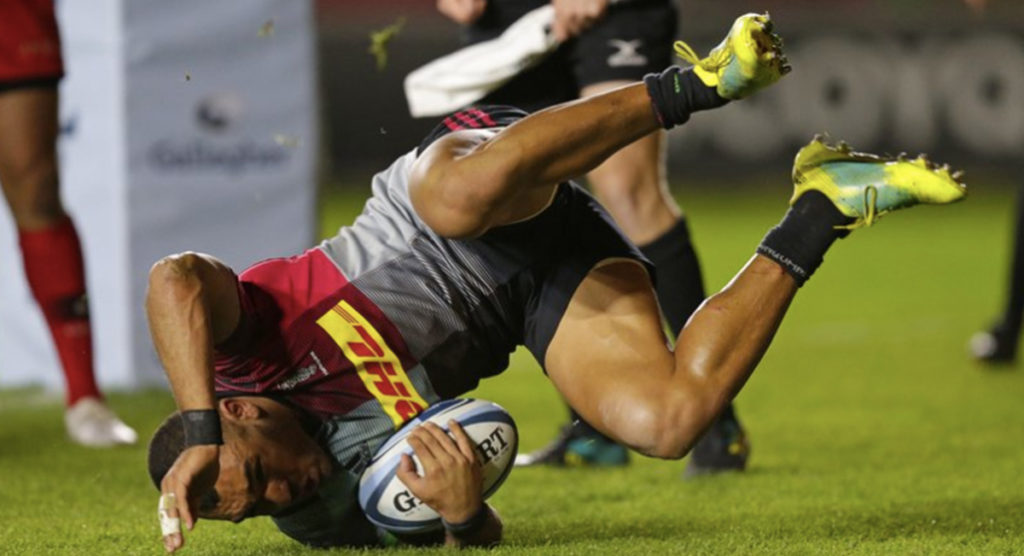 Harlequins fell in a heartbreaker to Saracens at Twickenham Stoop on Saturday night, 25-20. The biggest moment of the night for Quins came when centre Joe Marchant scored one of the most incredible, yet bizarre tries you’re likely to see this year.

Marcus Smith lined up to take a penalty early in the second half, but his kick looked to be held up ind the wind and pushed right of the target. Quins fans were thrilled, however, as the ball fell into the leaping arms of Marchant, who chased and read the kick beautifully and used his momentum from the jump to carry him backwards for the score. Smith then converted, giving Quins a 20-12 lead.

Harlequins also got an earlier intercept try from Danny Care, who was making his 250th appearance for the club.

Unfortunately for the home side, the steady kicking of fly-half Owen Farrell and a Billy Vunipola try were too much and helped Saracens pull ahead for good in the final 10 minutes. Saracens still remain unbeaten, winning six from six and their last 13 Premiership matches.

Despite the win, for the first time this year, Saracens did not secure a bonus point victory. Speaking after the match, Harlequins head coach Mark Mapletoft said: “It’s a mixture of incredible pride and incredible frustration. It was incredible under immense pressure from them. They’ve clipped pretty much everyone this year comfortably, so I couldn’t be more proud of the effort.”

On another note, this was the first Premiership match being screened in the United States. Unfortunately for the US audience, current USA Eagle and former NFL fullback Paul Lasike was forced to leave early in the match with a head injury.

This try, however, is one for the highlights reel.