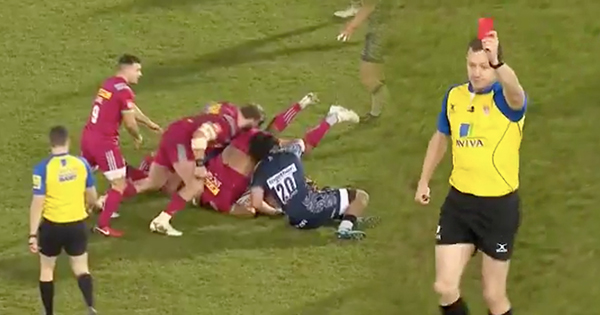 Harlequins front rower Joe Marler will be in doubt for this year’s Six Nations campaign after he received a straight red card in Saturday night’s Aviva Premiership clash with Sale Sharks, which the latter edged 30-29 after a late referee decision.

Harlequins were 22-17 up when the England prop dropped his shoulder into Sale Sharks flanker TJ Ioane, leading to referee Matt Carley dismissing him from the field.

“That’s the part of the game we need to take out, where someone’s defenceless and you can knock them with your shoulder,” said Sale Sharks’ Steve Diamond.

Harlequins director of rugby John Kingston backed his man though, saying he was on top form.

“This is not an isolated punch, stamp or kick, it’s a clearout that’s not legal and he’s taken somebody out without (using) his arm. It’s a physical game, an awful lot of people do that. He will be unbelievably disappointed and upset about the whole thing.

“Joe was having an unbelievable game as well, that’s the other thing to remark on. His form last week and today had been absolutely outstanding. It’s something that will be dealt with as required, but it clearly had an impact on the game.”

A try by Jamie Roberts kept them in the game but South African’s Faf de Klerk and Rohan Janse van Rensburg put Sale ahead.

Roberts crossed again late in the match, but referee Carley ruled that Chris Robshaw was out in touch just seconds before – a decision that could have gone either way – so Sale hung on.

Marler will face a disciplinary hearing this coming week.