Joe Pietersen's sensational try for the Stormers against the Highlanders 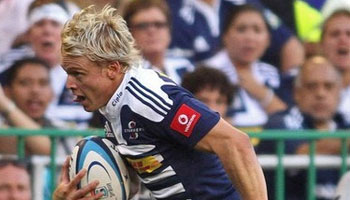 The Stormers maintained the best defensive record in Super Rugby 2012 as they beat the Highlanders 21-6 at the Otago Stadium on Saturday. In the first half Joe Pietersen crossed for a superb counter-attacking try, another contender for try of the season.

When watching this on the weekend, one couldnt help but think back to two season’s ago and that unbelievable team effort against the Chiefs, when they went the length of the field before Bryan Habana casually finished it off.

On this occasion it was slightly different, but yet another fantastic try on the road, this time started and finished by dynamic 27 year old fullback, Joe Pietersen.

Gio Aplon had scored earlier after some good pressure and a hack ahead from Jean De Villiers. Despite the comfortable win, De Villiers says this top of the table clash ‘definitely wasn’t easy’.

“It was against a quality side and we were probably a bit lucky with some tries in the first half but we’ll definitely take the win,” said the Stormers skipper.

They are now the only unbeaten side in the competition, and have the best defensive record, stats that will hold them in good stead when they take on the Crusaders next weekend.

This try by Pietersen started way back in the Stormers half after the Highlanders failed to break their watertight defence, and were in fact driven back a few times.

While the Stormers have looked more composed than flashy of late, they do have the ability to score tries like this and have an interesting few weeks away from home coming up, as they face the Crusaders, the Reds, and then the Force before heading back to Cape Town.

If this try, and Pietersen himself, reminds you of a certain former All Black wing with similar features, you’ll be pleased to know that the commentator giving his approval is actually none other than try scoring machine, Jeff Wilson.

View highlights of the Highlanders vs Stormers here