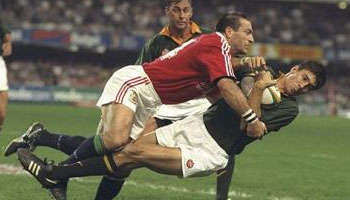 British (& Irish) Lions hero John Bentley has urged Warren Gatland to pick on form and not reputation when he selects his squad for the tour of Australia next summer.

Wales coach Gatland will be in charge of the Lions as they bid to win a first series since 1997. Bentley was part of that successful squad in South Africa, scoring a memorable solo try in a tour match against Gauteng Lions.

Bentley believes facing Australia next year represents a chance of success for Gatland’s men, providing the right squad is selected.

“Warren Gatland has been proven in the last four years as being a great coach with Wales and he has got the best out of his players, so he is the best man for the job,” said Bentley, who started the second and third Tests in 1997.

“The important thing about selecting the Lions squad initially is selecting players who are in form at the time, reputation will count for nothing. He has to pick those who are playing well.

“The Lions comes along only once every four years and they only go to three countries and it will be a great challenge going to Australia. But of the three countries – Australia, South Africa and New Zealand – it’s probably the best one to go to to seek that elusive win.

“The important thing is to try and get them to be a team as quickly as possible. In 1997 we became a side, a team, and importantly it doesn’t want to be a midweek team and a Saturday team. Ultimately everyone wants to play on a Saturday because that is when the Tests are played.”

SSE Rugby Energy is dedicated in helping clubs across England save money on their energy bills. To find how your club can start benefiting from these savings log-on to www.SSErugby.com

The Hurricanes have pulled off a major coup by signing former All Blacks prop Owen Franks on a two-year deal.