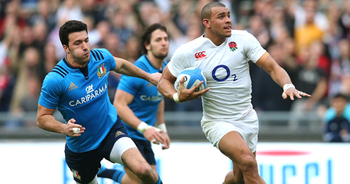 Jonathan Joseph scored a hat-trick of tries as England put in a strong second half display to punish Italy 40-9 in Rome on Sunday. England now top the overall Six Nations table, tied with France but ahead due to points difference.

Joseph’s first try in the 53rd minute, and intercept, swung the game England’s way as Italy were putting up a determined fight in front of their home crowd.

He scored two more, prompting new coach Eddie Jones to come to his defence post match, when questions were still being asked about Elliot Daly possibly snapping at Joseph’s heels.

Jones said that they fully expected to have a strong second half showing.

“I was pleased by the way we put them away. In the end we were quite dominant. We were quite brutal in the second half, really came off the line and hurt the Italians.”

Italy’s captain Sergio Parisse tried to remain positive despite the hiding they received.

“I’m very disappointed. I don’t like this, you can’t lose by 40 points. But this doesn’t change anything, we will work harder and be more determined.”

Short highlights below, with an extended wrap to follow