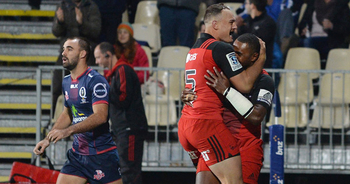 The Crusaders made short work of the Reds in round 11 of Super Rugby earlier today, with winger Jone Macilai stealing the show with a fine hat-trick. He wasn’t the only player streaking down the wing though, as you will see in the highlights.

The Kiwis won their ninth match of the season 38-5 over a disappointing Reds side to top the standings, while the Aussie lie second bottom after another frustrating weekend.

Macilai bagged an early double before showing a great pair of hands to set up second-row Scott Barratt for his team’s third.

The Fijian-born winger then completed his hat-trick with a typically clinical finish three minutes into the second period, effectively burying the game at 26-0.

In terms of individuals standing out, flanker Jordan Taufua possibly had the moment of the match, as he shot down the right wing and threw an audacious dummy that allowed him to cruise in untouched.

Winger Macilai’s inclusion was perhaps fortuitious, having been brought in for the suspended Nemani Nadolo. But the former Northland player performed with aplomb. If his native land does not cap the flyer, a possible future with the All Blacks may beckon.