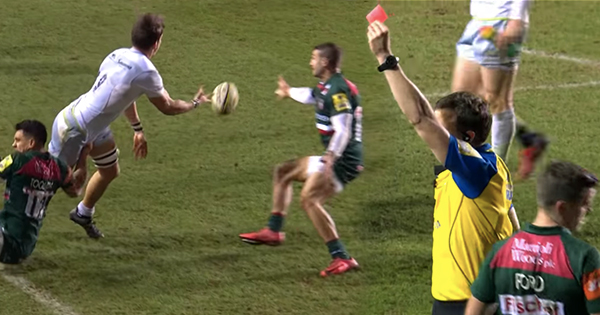 Leicester Tigers winger Jonny May is free to play after he received two yellow cards and a sending off during Sunday’s match against Saracens. May was sin-binned twice for the exact same offence. Saracens won the match 29-17.

May received his first yellow card early on in the match for a deliberate knock on, as ruled by referee Matthew Carley. A penalty try was also given, adding to the pain.

He returned to the match but 60 minutes later was picked up for the same offence, a deliberate knock on, that time leading to a red card for receiving two yellows.

The charges against May were heard by an independent judicial officer, who referred to the sanction table set out in Appendix 1 of RFU Regulation 19. That stipulates that when a red card is given for two yellow cards, where both are given for technical offences, a sending off is sufficient.

May is therefore free to play again immediately. You can view both incidents in the clip below.