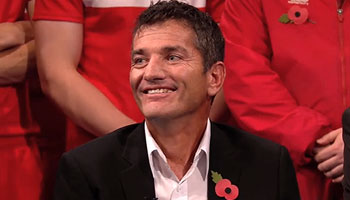 Springbok legend Joost van der Westhuizen has been in the UK of late, traveling around to not only watch matches but also to spread awareness for MND and the work his J9 Foundation does. He was on BT Sport’s Rugby Tonight recently for a catch up chat.

A few weeks ago Van Der Westhuizen lost a former team mate to Motor Neuron Disease, as Western Province legend and Springbok tourist Tinus Linee tragically passed away after a 19-month struggle. Now more than ever, Joost aims to spread further awareness of this debilitating condition.

Ahead of England’s Test against South Africa, he spoke to the Rugby Tonight team that includes Matt Dawson, Austin Healey, Martin Bayfield and Ben Kay – all players that the former number nine played against during his prolific Test career.

His brother, Pieter, helped out as Van der Westhuizen touched on the fact that Dawson and Healey were always fierce adversaries, but that he also remembers Dawson’s famous dummy in the Lions tour of 1997.

Coming back to the present, the Blue Bulls legend feels that South Africa’s loss to Ireland at the weekend is the kind of reality check they needed, saying that the Irish have done them a favour, just a year out from the Rugby World Cup.

On a more serious note, Joost has two small children and while he knows that his life is slowly ticking away, he aims to create as many memories and quality moments as possible. He has also said that there are two things you should not take for granted: time, and your healh.

“There are two things we take for granted every day – time and health. The moment you lose them, then only do you wake up. I had a choice. Either I stay at home and die, or I live my life. I have a platform and now I’m using it to help with MND,” he said recently.

If you were one of those that did the ALS Ice Bucket Challenge recently, this is what it’s all about and while the hype surrounding it has died down, Joost and Linee are examples of the horrific realities of the affliction.