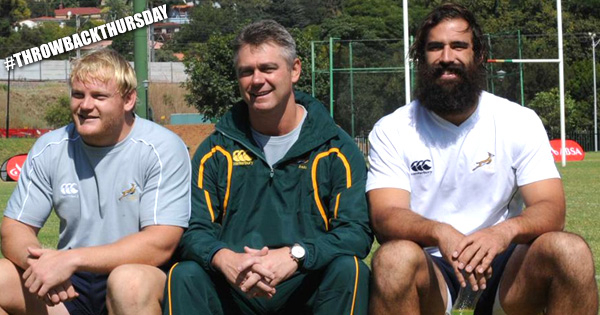 Scotland have named their starting lineup to take on the Springboks in the Pool B clash in Newcastle on Saturday. South African Josh Strauss, now qualified to play for Scotland, will start against his former countrymen, with Kiwi Blair Cowan and Zimbabwean born Dave Denton making up the loose trio.

Scotland currently lead Pool B on ten points following two comfortable victories over Japan and the USA. The Springboks are in second place, three points behind after picking up two bonus points against Japan, and the maximum five against Samoa.

Therefore there is a lot to play for on Saturday, and Strauss, who has trained with the Springboks (see pic below) and captained the Johannesburg based Lions in the past, will be raring to get stuck in.

“South Africa is a very proud rugby nation. I think against Japan they were surprised,” said the strong carrying loose forward who reportedly first grew that famous beard when away from his girlfriend.

“They’ll be very physical.. very straight, big runners coming around the corner and they’ll be looking for an arm wrestle, so I think that’s what we can expect.”

Kick off on Saturday at St James Park in Newcastle is at 16:45 local time.

South African Rugby posted this pic as a Throwback Thursday on twitter earlier, with Strauss and his namesake Adriaan, and coach Heyneke Meyer at a Springbok camp back in 2012.

How’s this for a #ThrowbackThursday? Heyneke Meyer, Adriaan Strauss, @JoshStrauss1 during #Boks camp in 2012 #rwc2015 pic.twitter.com/DugLgSK4Wq