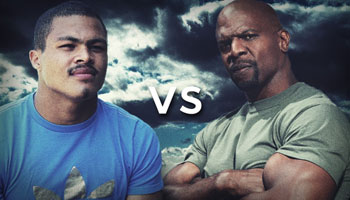 A video of Juan De Jongh taking on Terry Crews in a short dance off has gone viral of late, despite it taking place and being uploaded over a year ago. The original Youtube clip was actually submitted it to us earlier this morning, but it has also been ripped and re-uploaded on other facebook pages, resulting in thousands of views.

If you don’t know who Crews is, he’s a former NFL player but also a well known actor, comedian and clearly, he knows how to move. De Jongh is known for his silky moves both on and off the pitch, but was put to shame on this occasion as Crews, who filled out a Springbok jersey nicely, dominated with his robot, much to the amusement of the other Bok squad members.

Incidentally, De Jongh got a call up to the Barbarians squad yesterday, where he will be part of the team that take on Australia at Twickenham on November 1st. Coached by former All Black John Kirwan, the squad is dominated by Kiwis, but also features a few Pumas players, ‘Honey Badger’ Nick Cummins, Ali Kellock of Scotland, and Mahonri Schwalger of Samoa.

Barbarians squad to face the Wallabies: