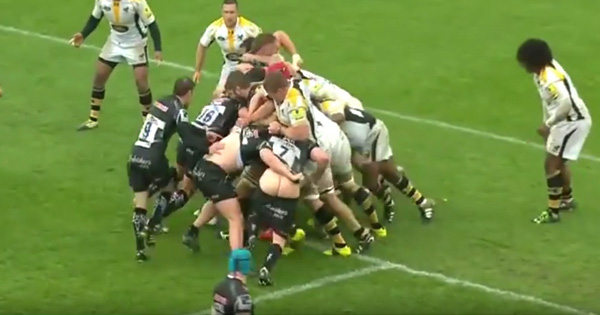 Exeter Chiefs beat Wasps 34-23 to reach the Aviva Premiership final, just six seasons after moving up from the Championship. In the second half the Chiefs pushed for forward dominance, and we got to see just a bit too much of flanker Julian Salvi.

Australian Salvi was stuck in the back of the maul and as Wasps replacement Ashley Johnson attempted to bind on and counter drive, he got a hold of Salvi’s shorts, lowering them accidentally for an akward few minutes of live TV.

As Salvi’s head was buried deep in the maul, he just kept going, as did his teammates who clearly weren’t too fussed. Salvi now has a twitter account named after him, the @ExeterCheeks.

@danbowden_ ha cheers bud! Cracking day out! Most attention I’ve had in years! May have to make this a weekly thing