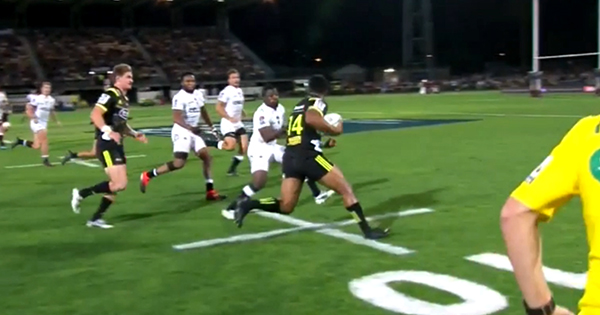 The Hurricanes snatched a dramatic last-ditch win in their Super Rugby clash with the Sharks on Friday, taking a 38-37 win thanks to a late converted try. Earlier in the match, winger Julian Savea got his hands on the ball and made Lwazi Mvovo pay for a poor tackle attempt.

Mvovo appeared to just want to get in Savea’s way, which as we’ve seen on multiple occasions, just isn’t good enough against the big man they call The Bus.

The Sharks winger went flying, well and truly dealt with by the former All Blacks powerhouse.

The visitors had led 27-19 at halftime after each side has scored three tries apiece, but a late comeback from the Hurricanes, including a yellow card to the Sharks, allowed impressive centre Ngani Laumape to cross after multiple phases of attack, five minutes after the full-time siren.

Number ten Ihaia West, in for injured Beauden Barrett, then completed the job with the straightforward conversion, taking his side ahead and sealing a memorable win in Napier.

The visitors had looked the stronger side for large periods of the contest, but with momentum late in the game and a man advantage, the hosts managed to pick up their fifth successive win.

This was the Sharks’ fourth loss from seven, but with a confidence boosting 63-40 win over the Blues last weekend, and six of their last nine matches based in Durban, they will take heart from the way they played.