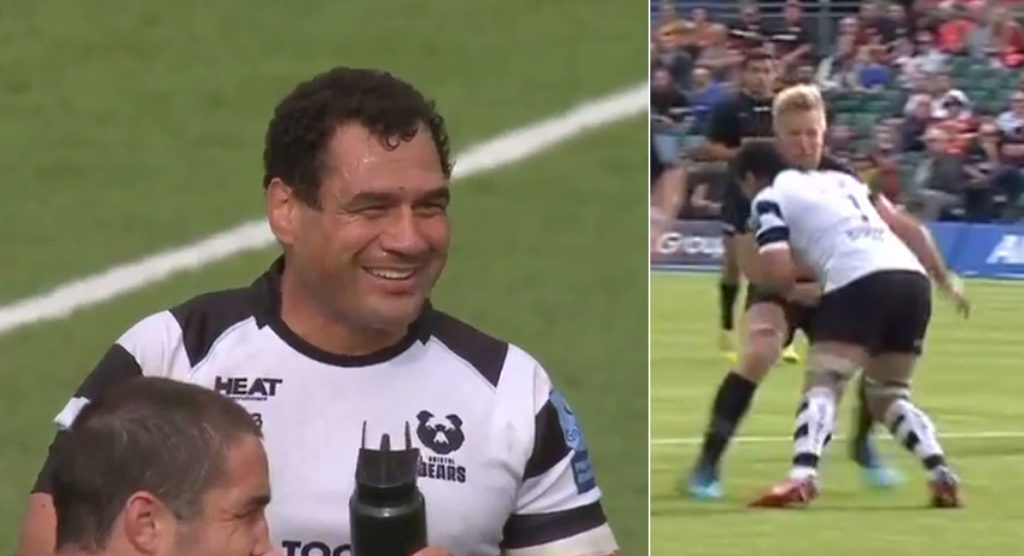 Wallaby great George Smith was red carded for what was deemed to be a dangerous shoulder to the head of Jackson Wray on Saturday, leading to an independent disciplinary hearing that took place on Tuesday evening. It was the first red card of the 2018/19 Premiership season.

The Bristol Bears flanker was clearly dismayed with referee Andrew Jackson’s decision, at the time telling the official “I’m playing rugby” after he was shown the card.

Smith was deemed to have committed an act contrary to Law 9.13, but contested the charge successfully, with it dismissed by the panel. He is free to play again immediately.

Panel chair Gareth Graham said: “The independent panel had the benefit of viewing this incident from a number of different angles. The footage did not clearly show whether or not there was direct contact between the player and the head of Jackson Wray.

“The panel heard evidence from Wray who said that he could not remember whether there was direct contact with his chin; he said that this was a big collision which was well-timed.

“The player explained his actions in detail and assisted the panel by demonstrating how the tackle had been carried out. He demonstrated how the position of the ball was important as to how the tackle situation developed, as it created an effect whereby it caused Wray to bounce backwards in the collision.

“The panel concluded on the balance of probabilities that the initial contact did not involve any direct contact to the head of Jackson Wray. Wray was off-balance in the tackle and the force of the tackle and the effect of the ball being between the two players caused Wray’s head to ‘whip’ backwards.

“On Wray’s own evidence, there was then a glancing contact to the underneath of his chin which was incidental to an otherwise legitimate tackle. In the panel’s view, and taking into account all of its rugby experience, that glancing contact did not pass the red card threshold.”

It’s a big call, considering that player welfare is so heavily sanctioned these days, particularly around even the slightest bit of contact with the head.

You can watch an official, longer video of the incident here

Bristol Bears head coach Pat Lam was also of the opinion that it wasn’t a red card, stating after the match: “If you put it into context of other decisions, I don’t think it’s any more than a yellow card. It’s certainly a penalty – without a doubt. A yellow card? Possibly. It needs to be clear and obvious but the number of replays they used suggested it wasn’t clear and obvious,” he said.

Wray left the field for a head injury assessment but was unable to return.

While the scores were tied at 18-18 when Smith was sent off, Saracens took full advantage of the extra man for a 44-23 home win.