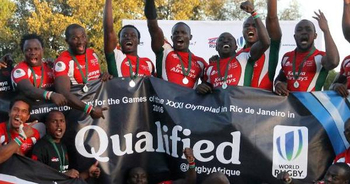 Kenya became the latest side to qualify for next summer’s Olympic Games in Rio de Janeiro s they came from behind to beat Zimbabwe in a thrilling African qualifier.

They’ve been part of the Sevens World Series for a number of years, pleasing us with their array of skills and tenacity which has seen them grow from minnows to World Cup bronze medallists in 2009.

Despite many tipping them to be a shoe-in for an Olympic spot, they nearly fell to a shock defeat to a determined Zimbabwe side who led 17-14 as the final hooter sounded.

But Dennis Ombachi spared the blushes and scored at the death to take a dramatic victory with a superb coast-to-coast try.

Catch the match highlights below. Also, with the Olympics just under 9 months away, who do you think will stand out at the Games in August?