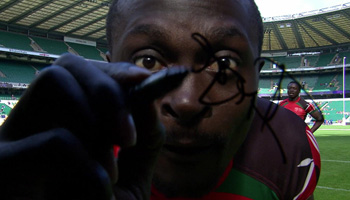 Collins Injera’s 200th try celebration at the London 7s has gone viral, causing a bit of a stir around the globe for as much good as bad. While it was a classic celebration, with the marker stored in his sock until being needed, there were concerns about the damage to the camera.

While many media sites have claimed that the damage caused to the camera lense could be upwards of £60,000 ($93,000), and that the Kenyan star would be made to pay, it appears to be purely speculation and based on nothing more than an assumption.

We reached out to World Rugby (formerly the IRB), and were told that there has been no confirmation of this story, and in fact the same camera shot was used later in the day, so it appears as though the fuss that has since been made is unfounded, and no cameras were harmed in the making of this celebration.

Of course if anyone has any concrete evidence, or a new story breaks about Injera being banned and fined, we – and the World Rugby source – stand to be corrected.