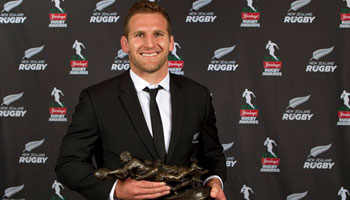 Kieran Read capped off his brilliant year by claiming the Kelvin R Tremain Player of the Year award. Read was also named IRB Player of the Year for 2013 earlier this week. Here is a clip from the awards evening, including a candid interview with Read himself.

The All Blacks scooped the major honours at the Steinlager Awards after becoming the first Tier One nation to notch up a perfect season in the professional era.

In addition to the adidas Team of the Year award, Head Coach Steve Hansen picked up the coaching prize for the second successive year, heading off World Cup winning coach Sir Gordon Tietjens and Dave Rennie who guided the Chiefs to back-to-back Investec Super Rugby titles.

Dynamic no.8 Kieran Read was named the Kelvin Tremain Memorial Player of the Year.

The awards cap a stellar year for the All Blacks who earlier this week were named IRB Team of the Year, with Hansen and Read also being named world’s best coach and player respectively.

adidas Team of the Year
•    All Blacks