Kurtley Beale back from the dead, then commentator swears 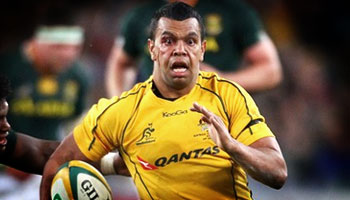 Possibly the most naturally gifted fullback in world rugby today, Wallaby Kurtley Beale showed how lethal he is with ball in hand again on the weekend. He also did a BOD. Oh, and a commentator swore on air right after that.

What does Kurtley Beale have in common with Brian O’Driscoll ? Not a helluva lot probably. Those of you who watched Saturday’s Tri Nations game, and watched the Magners League Grand Final two months ago, will probably have made the connection though.

O’Driscoll showed his typical never say die attitude in that match, as he was getting treatment for an injury when he popped up to make a tackle . Beale did the same thing against South Africa, which immediately brought back memories of that great BOD moment.

In this case, Beale almost set up a great try after rejoining the action, but it was called back as the Wallabies got close to the tryline. Gio Aplon’s collision with Beale didn’t look too bad at first, especially when you saw him hop up and streak down field, but the fullback was actually cut quite badly, so got strapped up after.

In fact of all the Wallaby players, Beale is in the worst shape following the match, having had four stitches and a twisted ankle. On top of that, he now has his arm in a sling too. The game-breaker will apparently be fine to play against the All Blacks in two weeks time though.

It was a classic moment in the match, and if that wasn’t enough to entertain you, commentator Greg Martin then slipped up by swearing on air. Great stuff.