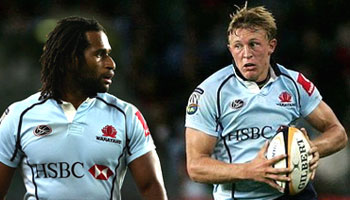 The Waratahs played in a thriller against the Crusaders on the weekend. If it weren’t for some poor play by Peter Hewat (missing a vital conversion and dropping the ball in open play, as well as him & Lote stuffing up an intercept) the Waratahs may have snuck victory.

The 19 year old Lachlan Turner arrived though, scoring a fantastic try in which he outstripped Rico Gear and beat Leon McDonald. Huge potential shown, and a possible find for the Aussies for this years World Cup? Still early days though.

Besides Lote Tuqiri’s shocking intercept try attempt, he redeemed himself here with an excellent run and set up a try, showing the skills & strength expected of him, and expected of a guy who gets paid that much.