Last minute win for the Force from Cameron Shepherd 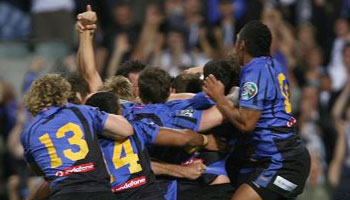 A week after the Sharks did the impossible to score with time up against the Crusaders at Kingspark, the Force pulled off another of this year’s amazing escapes to beat the Hurricanes 18-17 in the dying seconds.

It was the first win at home for the Force in two seasons of the competition, finally giving back to the Perth faithful who turn up every week win or lose.

Cameron Shepherd, who is having a fantastic tournament, did it for the Force with a finish in the corner after a courageous fight back by the men from Perth. After the try was scored, the conversion was still needed to win it, and Shepherd didn’t dissapoint.

Emulating Ruan Pienaar the week before, he ignored the pressure of the big moment and kept his head. A great moment for the Force, and any neutral rugby fan.