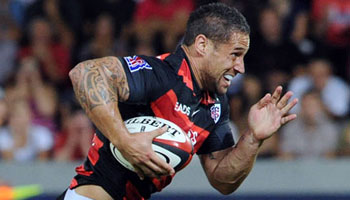 Last weekend in the Top 14 there was a fair dose of drama and controversy as Toulouse came from behind to score an injury time try through flyhalf Luke McAlister, giving them a 24-23 win over Agen. Chaos ensued in the tunnel afterwards, with security having to protect the ref.

While the whole of New Zealand attempts to get over the shock loss of Dan Carter for the All Blacks, Toulouse benefit from Graham Henry having shunned a possible replacement who appears to be in the form of his life. McAlister, who was a member of the 2007 squad that failed to make the semi finals, is loving his time in France, and it shows.

He’s been a hero for Toulosue of late as he’s led them to wins over Lyon, Racing Metro, Biarritz, Agen, and most recently a few days back, over Clermont. As you’ll see in this game over Agen, he came up trumps again with the winning try, albeit after some very strange refereeing.

Toulouse had led 14-3 at half time, but Agen came back nicely and actually took the lead following a try from Opeti Fonua and twelve points from flyhalf Conrad Barnard. With fulltime up, Toulosue appeared to have knocked on and the Agen coaches and support staff celebrated on the sideline, only to find out the game was not over. The visitors took a scrum, and McAlister crossed for a try, then casually slotted the conversion for the 24-23 win.

We’ve included a subtitled video of what happened after the final whistle. The Agen coaching staff were furious with the ref. Security intervened, which resulted in some pretty ugly scenes. The second video will play after the first, or you can skip to it via the playlist controls.