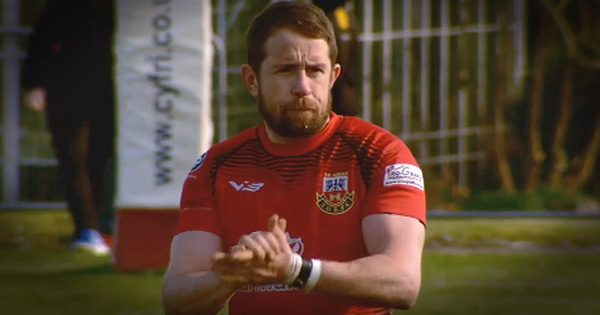 Wales legend Shane Williams turned out for his local club this past weekend, helping them to qualify for the WRU National Bowl final, which takes place at the Principality (former Millennium) Stadium next month. At 40-years-old, Williams still has some magical touches.

Wales’ record try scorer turned out for Amman United RFC to beat Cardigan 29-3 in the semi final, helping them to the Cardiff final, where they will face Caerphilly.

He first played for the club in 1997, in his first senior rugby appearance, when he played scrumhalf.

“A lot of these boys I played with at youth level, it is like a family to me.”

Williams was set to start on the bench and possibly get a run, but he ended up coming on after just 18 minutes, for his brother-in-law.

“I was as nervous running out for Amman in the semi-final of the National Bowl as I was for a Six Nations match, it meant that much.”

He made quite an impact, although the biggest impact of the day was felt on his jaw, leading to a hairline fracture. It hasn’t deterred him though, and he says he will be available for the final should his services be required.

“I would love to be involved, even if it’s just a cameo experience,” he said.

“The credit is for the other players for getting us there. I feel like I am jumping on the bandwagon. The way they are playing this season, they don’t need me in all honesty.

“I wouldn’t begrudge anyone starting ahead of me. I have experienced it plenty of times. I am there to help the club out – my brother, brothers-in-law and friends from years gone all play for the club.”