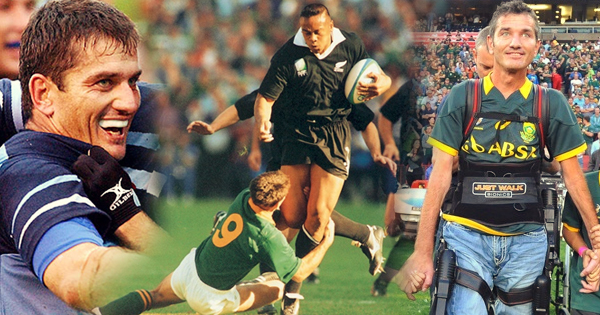 Springbok legend Joost van der Westhuizen has lost his lengthy battle with motor neuron disease. The World Cup winner passed away on Monday afternoon after having been rushed to hospital in critical condition on Saturday. He is survived by two children, and was 45-years-old.

Van der Westhuizen had been suffering from ALS (Amyotrophic Lateral Sclerosis), a form of Motor Neuron Disease (MND) for the last six years.

“Joost will be remembered as one of the greatest Springboks – not only of his generation, but of all time,” said Mr Mark Alexander, President of SA Rugby.

“As a player, he lifted the Rugby World Cup, Tri-Nations and Currie Cup while establishing himself as one of the best scrumhalves world rugby has ever seen. He was the record holder for the most Test tries for the Springboks for more than 13 years and finished his international career with 38 Test tries.

“He also became an inspiration and hero to many fellow sufferers of this terrible disease as well as to those unaffected. We all marvelled at his bravery, his fortitude and his uncomplaining acceptance of this terrible burden.

“It’s a sad day for rugby in South Africa and across the globe as we say goodbye to a legend of the Springboks. Our condolences go to his family and friends at this sad, sad time.”

Despite his deterioting health and extreme difficulties in recent years, Joost made it his personal mission to improve conditions, support and facilities for other sufferers out there. He did this through his J9 foundation, who have stated that they will continue the fight.

I can’t express how devastating this is. Fearless on the field, more courageous off it these last few years. #RIPJoost pic.twitter.com/bXLz1lvTL8

Our thoughts and condolences go out to @9Joost family, friends and the millions of fans that adored him. https://t.co/sG4G5zTiJs pic.twitter.com/ppPqFdDeiy

Great memories with our dear friend and team mate, laughing eyes even in the face of adversity! #RIPJoost we miss you already. pic.twitter.com/hlBxv3QVFZ

I’m absolutely gutted! One of my heroes growing up! #RIPJoost ???? pic.twitter.com/zbaUPqT0VX

RIP Joost van der Westhuizen. An incredible player and fighter to the end. The first of the new age 9’s.

“In every game he played, we always talked about what Joost did to change the game”, says @NaasBotha10. #RIPJoost https://t.co/COCjPboN7J

In 2009 we featured this fantastic video tribute to Joost, so have included it here again today.

May the great man, who inspired countless young rugby players around the globe, rest in peace.