Leinster hold out against Clermont to reach another Heineken Cup final 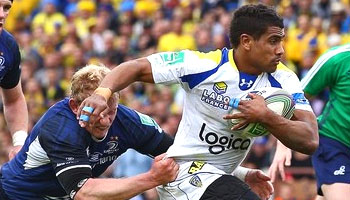 Leinster booked themselves another Heineken Cup final as they beat Clermont 19-15 in a dramatic game that went right down to the final minutes. Today we’ve got highlights for those of you that missed the game, or just want to relive the best bits.

Leinster held off Clermont in a frantic last few minutes as they set up an all-Irish European Cup final, where they will face Ulster, who beat Edinburgh on Saturday.

French centre Wesley Fofana could have won it for his side, but failed to ground the ball over the line with two minutes left on the clock. Leinster’s Cian Healy made no mistake earlier in the game as he crossed following a lovely break from Rob Kearney.

“The guys didn’t hold back in putting their bodies on the line when Clermont attacked in the final few minutes. We can be very proud of winning a game such as this,” said Leinster coach Joe Schmidt.

The win sets up an intriguing clash with Ulster, who are looking to emulate the success Leinster have had in the competition. “Leinster and Munster have probably been the forerunners with regard to European rugby and Irish rugby,” Doak told the Belfast Telegraph.

“For (want of) a better word, we’re jealous of that. Obviously they have been in three finals in four years, which is absolutely tremendous from their point of view. It’s a credit to their management and the players — they’ve worked hard and got themselves to three finals out of four.

“We want to do that; we want to emulate and better that. We’ve got a chance in the cup final in a few weeks time, though, obviously, Leinster are going for back-to-backs so we’ve just to try and make sure that we do ourselves justice, pitch up, hopefully upset them and get ourselves a second European win,” he said.

Leinster will face Ulster at Twickenham in the final on May 19th. What’s your prediction?