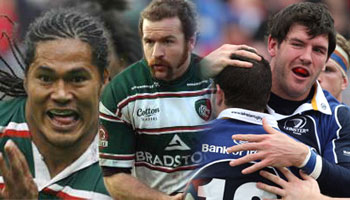 Crowd favourite Alesana Tuilagi smashes Gordon Darcy as he gets a ball-and-all pass from Argentinian star Felipe Contepomi. The powerhouse Samoan wing times the tackle perfectly, hitting Darcy hard and driving him to the floor.

Even more more sensational than that though was a bit of defensive brilliance from big Leinster winger Shane Horgan. After a loose ball is picked up by Irish international Geordan Murphy, Leicester looked sure to score a spectacular break away try.

Horgan chased hard though, and miraculously caught Murphy, who most people would have backed to go all the way. Horgan then made another try saving tackle, this time on Tuilagi. He then got into the ruck and helped to win the ball for his team. Brilliant speed and commitment shown by the big guy. Was it more Horgan’s sheer speed, or Murphy’s lack of gas?

Alex Tuilagi’s tackle was fun to watch, but it was the only moment in the game where he really stood out. Shane Horgan, and indeed the entire Leinster squad, fired the entire 80 minutes in their defensive work. Big and desperate tackles were in abundance and in the end it paid off with them coming out 22-9 victors.