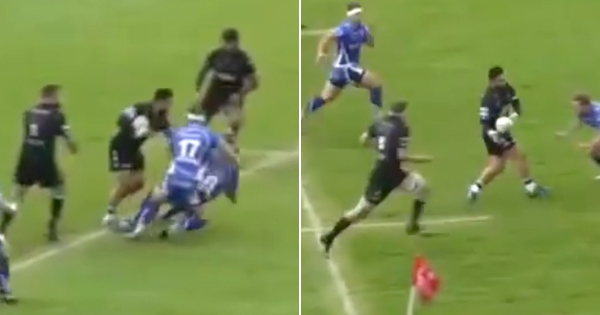 Glasgow Warriors start their PRO 14 campaign on Saturday against Connacht, following on from a successful 40-23 away pre-season win over the Dragons last weekend. Young second rower Scott Cummings scored a fantastic try as part of the win, set up by veteran flyer, Lelia Masaga.

The former Chiefs ace smashed through the forwards before another big handoff allowed him to draw the final defender and offload to Cummings, who showed very impressive acceleration to keep up and then even more surprising overall speed to gas the cover defence.

It was a try that impressed former Chiefs coach Dave Rennie, now in charge of the Warriors.

“Lelia’s first touch wasn’t bad – he handed off a couple of guys, then fed Scott Cummings who goes from halfway. He’s an infectious guy who’s great around the environment. He’s probably not where he needs to be but I think there’s a lot more to come from him and he adds a little bit of X factor.”

Masaga, still only 30-years-old, starts this weekend against Connacht, as does Cummings.

Glasgow are also boosted by the news this week that electric Fijian Niko Matawalu has returned to the club following a two year spell in the Aviva Premiership in England.

“Glasgow Warriors was my first professional club and first club outside of Fiji, and it’s where I met a lot of good people,” said the 32-times Test-capped Fijian.

“Dave Rennie is a very good person. He’s very down-to-earth and he had a good chat with me before I decided to come back. He’s a good man. I always play like it’s my last game and I’m really looking forward to playing in front of the fans again. I’m very excited to be back in Glasgow.”