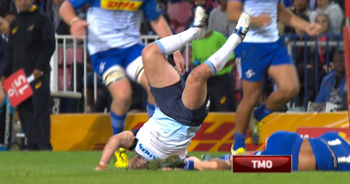 Stormers back Leolin Zas was shown a straight red card for this challenge on Bernard Foley on Saturday prompting discussions over the decision, as both players appeared to be making a fair attempt at claiming the ball. However, Zas has been banned for 2 weeks.

The 20-year-old flyer pleaded guilty to contravening Law 10.4 (i) Tackling, tapping, pushing or pulling an Opponent jumping for the ball in a lineout or in open play

Both players had their eyes on the ball but Zas slipped as he got close, causing contact with Foley and an ugly looking landing for the Wallabies number ten.

Referee Mike Fraser consulted with his TMO and although it was pointed out that Zas slipped, Fraser ruled that it can’t be taken in account, as Foley’s landing was extremely dangerous.

After the match the Stormers captain, Juan de Jongh, referred to the Jason Emery/Willie le Roux incident from a week ago: “It is a tough one, and after what happened last week with Willie, obviously the refs (want to) do something about that, and safety is first priority.

“But I also feel that it was a little bit unlucky for Zas as he slipped a bit, and his eyes were on the ball. That was the ref’s call, and it’s not something that we will focus on or worry about. It is what it is, and it was always tough with 14 men.”

The Stormers nearly pulled off a courageous win, but instead it was the visiting Waratahs who scored with a minute left, snatching the 32-30 victory at Newlands (full highlights below).

Before the disciplinary hearing coach Robbie Fleck had hoped that the powers that be would take into account all the circumstances of the incident, particularly the slip.

“I think they will take into account that he did slip, and they might call it reckless, but there was no intent from our side. Like Juan says, it was a little bit unfortunate, but the law is the law, and the safety of the player is paramount.

“It was just the way he landed, I guess… If he had landed on his hip, it would probably have been a different call,” said the former Springbok center.

“I found it was a lower end offence on the basis that the video footage showed the Player’s right foot slipping as he was readying to compete for the ball in the air. This resulted in him moving on through and under the opposing player, causing that player to fall dangerously to the ground.

Fortunately the opposing player was uninjured. The low end entry point for the sanction was a three week suspension. There were no aggravating factors.

“As to mitigation, I took into account the Player’s youth and his early guilty plea, as well as his already expressed apology and his contrition. I allowed a reduction of one week, making a suspension from all rugby of two weeks, up to and including Saturday 14 May 2016.

“The Stormers  have a bye next weekend. I was provided written evidence that the Player would have been chosen to play for Western Province in a Currie Cup match against the Natal Sharks that forthcoming weekend. So that match should be, and is, taken into account as a match which he will be unable to play in. In addition, he will be ineligible to play in the Super match against the Sunwolves on the 14 May 2016.”

Quick clip of the incident below, and full highlights with more replays below that