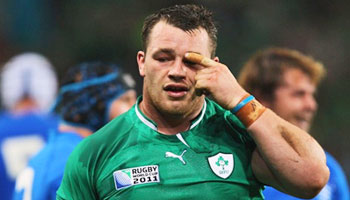 In what was a great first half battle between Ireland and Italy, the physical aspect crossed the line a little twenty minutes in, as Italian hooker Leonardo Ghiraldini placed his fingers over the eyes of prop forward Cian Healy.

Healy was clearly incensed as he lashed out at Ghialdini, creating a situation that was tricky to manage for referee Jonathan Kaplan. As you can see, he stopped the game and had a word with captain Brian O’Driscoll, stating that he didnt see anything and Healy shouldn’t have lashed out.

“How is he supposed to react?” said Paul O’Connell to Kaplan, who obviously acknowledged the severity of the incident. In many ways you could see that Healy, despite lashing out initially, was actually fairly controlled, all things considered.

You can hear a slight hint of sympathy from commentator Alan Quinlan, who himself missed out on the British & Irish Lions tour because of an eyegouging ban, but there’s no doubt the hooker was in the wrong.

In a time when any sort of contact with the eyes is highly frowned upon, you can be sure that Ghiraldini will be sticking around in New Zealand for some time longer, specifically to face a discplinary hearing and subsequent heavy ban. He hasn’t been cited yet however.

What are your thoughts on the incident, and the length of the ban he will no doubt receive?