Lewis Moody out for a month following eye injury 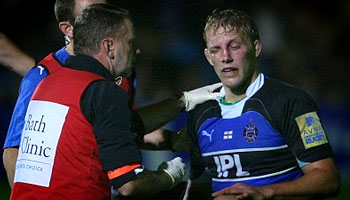 On a day when tragic news broke about Gavin Quinnell losing sight in his left eye, it’s good to hear that Baths Lewis Moody will be back in action within just four weeks after injuring his eye-socket in a collision with Charlie Sharples of Gloucester.

Some of you wanted to see what happened to Moody as these days when we hear eye-injury we automatically think the worst and presume there was an eyegouge of sorts.

In the case of Welshman Quinnell, who at the age of 26 is now blind in one eye, there has been foul play at hand but a source says it was actually a stamp, and not a finger that did the damage. That is yet to be confirmed though and is under investigation by both the Welsh Rugby Union and the police after an official citing complaint was made.

What we do know is that its a sad day for rugby and the great Quinnell family who have served their country so well. To them, we wish all the best and hope that Gavin is able to restore some kind of normality to his life in the very near future.

Moody on the other hand didnt receive an eye-gouge or a stamp, in fact what looks to have happened is that during the collision with Sharples, his own hand or thumb impacted with his eye causing a lot of distress at the time. A scan revealed that it isnt as severe as it could have been.

“Much better news than first thought. Back in action soon. Phew!” he tweeted.

He will miss this weekends Heineken Cup opener and will be in a race to get fit for Englands game against the All Blacks in a months time.