Life on the touchline: Harlequins mic up Team Manager 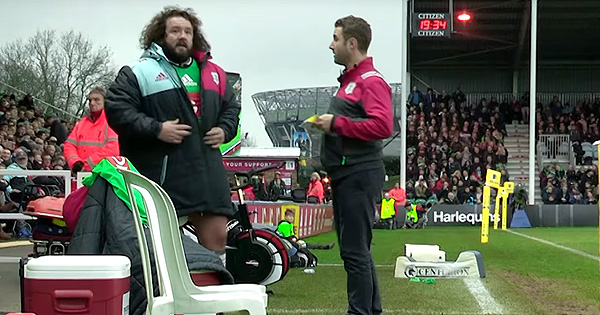 One of the most enjoyable aspects of modern day rugby television is the occasional player wearing a microphone during a match. It offers viewers the opportunity to get closer to the action and experience what it is like in the heat of the battle.

Instead of featuring players on the field of play, Harlequins’ latest video focuses on the role of team manager Graeme Bowerbank during the team’s game with Sale.

Throughout, we see how Bowerbank has to manage the late withdrawal of Joe Marler, who pulled up in the warmup, and let former Wales internationalist Adam Jones know that he is playing.

The video also shows how hectic life on the sideliness can actually be as Bowerbank deals with substitutes and HIAs while finding time to cheer on his side as Tim Swiel raced in for a decisive try in the second half.