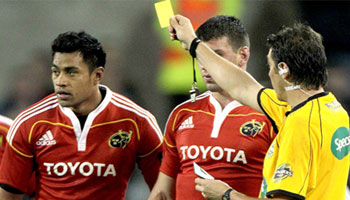 Leinster beat Munster 13-9 in their Magners League derby match at a packed Aviva Stadium on Saturday night. Brian ODriscoll scored the winning try for Leinster, while Munster center Lefeimi Mafi made two bad high tackles, for which he has now been cited. Both tackles and the try are included here.

The atmosphere at the new Lansdowne Road venue was superb as a passionate crowd braved the heavy rain to cheer on their sides. In the end it was the Leinster team who came out trumps thanks to BOD going over with ten minutes left in the game.

His opposing center, Munsters Mafi, has been cited for two offences. Firstly he made a terrible tackle on Gordon Darcy midway through the opening half. Darcy lay prone on the ground for quite some time, but managed to play on after a few minutes of treatment. Mafi has been cited under law 10.4(a) for allegedly punching or striking.

It wasnt picked up by the ref or his assistants but later in the game he made a similar tackle on Leinster fullback Rob Kearney, resulting in a yellow card. He has been cited under law 10.4(e) for that one, for an alleged dangerous tackle.

Hewill attened at hearing with a Irish Rugby Football Union disciplinary panel which will take place tomorrow, Tuesday, in Belfast at 16:00. He was cited by an independent citing commissioner who there at the ground. Hugh Logan and Stephen Hilditch will chair the hearing.

On a more positive note, ODriscolls try is included here as well, after the Mafi tackles.