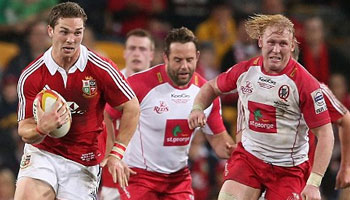 The British and Irish Lions faced their toughest challenge of the tour to date as the Queensland Reds threatened to upset the tourists in Brisbane on Saturday. The tempo changed in the second half however, and the Lions came away 22-12 winners.

Winger Luke Morahan was the star of the opening period, making an incredible try-saving tackle and scoring an even better try, as he glided through the Lions defence with ease.

It was the most exciting first half of the tour, as both sides made line breaks and came close to scoring great tries on more than one occasion. Unfortunately the rain picked up in the second half, which seemed to change the tempo of the match, and suit the visitors.

“The only way we could get an edge over them was by running them around and doing what we do best which is running teams off their feet and I’m very proud of the boys tonight,” said captain of the Reds on the night, flyhalf Quade Cooper.

“We don’t have the biggest pack or the biggest backs but we know what we’re good at and we try to do that to the best of our ability and we got very close there.”

The Reds scored two tries to one, but Owen Farrell’s goal-kicking proved the difference.

“Pretty happy with that one. I thought we showed great character,” said Warren Gatland.

“They threw everything at us in the first 20 but we toughed it out. They just kept working hard. A couple of decisions didn’t go our way but the boys stuck at it.”

It was their third consecutive win but they’ve picked up another serious injury, as Tommy Bowe broke a bone in his hand. He has already had surgery and will continue to be assesed, but Ireland winger Simon Zebo has been flown over, from Texas, to provide cover.

Front rowers Cian Healy and Gethin Jenkins will both be flying home after they suffered from ankle and calf injuries respectively. Alex Corbisiero and Ryan Grant were called up as cover.

Quick highlights recap below, and you can view extended highlights from the game here