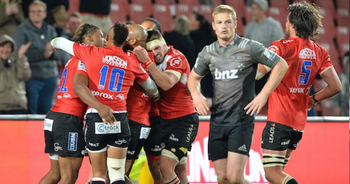 The Lions have proved to be the unlikely shining light for the South African Super Rugby teams as they defeated the Crusaders 42-25 in a highly entertaining game at Ellis Park. The Lions scored early and kept the momentum up throughout the match, while the Crusaders battled back as best they could, scoring a consolation try late in the game.

The victorious Lions have turned their fortunes around with very few big name stars and after having actually been relegated as recently as 2012.

But superb leadership, by both coach Johan Ackermann and captain Warren Whiteley, and a strong team work ethic has clearly brought the best out of them.

Through their performances, the likes of Faf de Klerk, Lionel Mapoe and Ruan Combrinck are now Test players, not to mention Elton Jantjies and Whiteley himself, who returned on Saturday.

They will host the Highlanders in the semi final in Johannesburg, in what will be their first time in the semi finals in 15 years. Getting there by beating seven-times champions Crusaders makes it all the sweeter.

“Look, the Crusaders got the better of us in the last three years of Super Rugby so we knew tonight was going to be a battle,” said returning captain Whiteley. “[I am] So proud of the guys.”

To reach the final they will need to lift their game yet again, as next week they face a hungry Highlanders team who will be determined to retain their Super Rugby title.