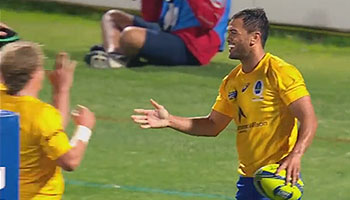 The guys are Fox Sports have provided us with another great bit of insight into what gets said on the rugby field during a professional match, as they mic’d up Brisbane City’s Karmichael Hunt in the NRC. A few months back they did the same with Christian Lealiifano.

Hunt has had his troubles, and he missed out a Wallabies Rugby World Cup spot, but it’s good to see him out there doing what he does best. He crossed for a nice try after a great run from fullback Junior Laloifi, and could be heard offering his teammates some encouraging words.

There is also a great little exchange post match between the cross code convert and a young fan, who asks him which of the three codes of footy he likes best, League, Union or AFL. Having played all three professionally, Hunt’s answer was spot on.