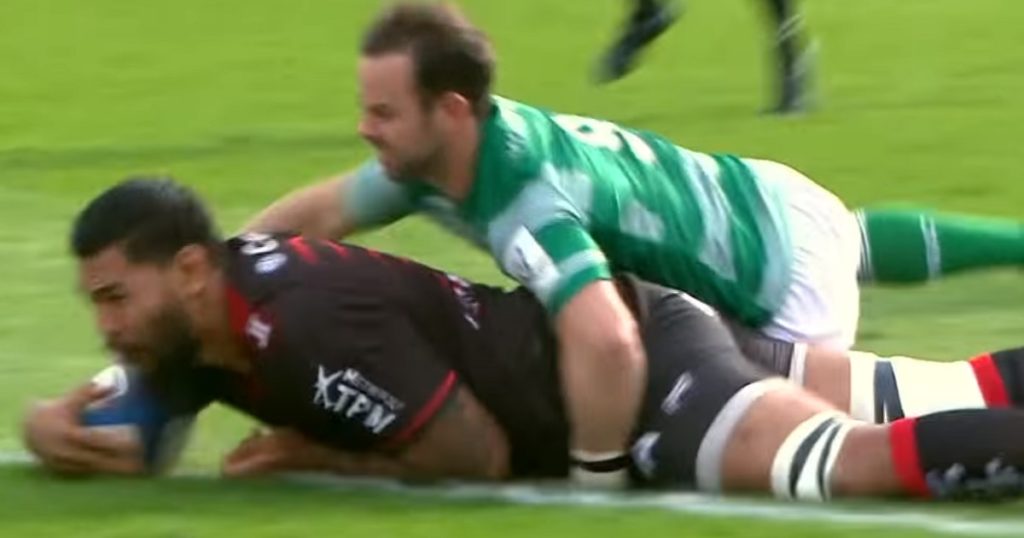 Newcastle became just the second team in European Champions Cup history to beat Toulon at the Stade Mayol on Sunday after recording a stunning 26-25 victory over the three-time champions in the opening round.

The home side succumbed to a late penalty try, despite scoring the second fastest try in the tournament’s history courtesy of Romain Taofifenua just seconds after kick-off.

The second-row used all of his 6ft 6 inches (2m) to charge down Falcons scrum-half Michael Young’s attempted clearance kick and surge for the line.

It was an impressive display of athleticism from the French international, who then showed good agility to get done to collect the ball and stretch for the score.

Unfortunately for Toulon, they were not able to capitalise on their early score and trailed Newcastle 13-10 at the half-time break.

Things got worse for the hosts in the second period as they went down to 14-men on two occasions, having already lost Jean-Baptiste Gros to a yellow card in the first half. Daniel Ikpefan and Julian Savea both saw yellow, which cost Toulon dearly each time.

Ikpefan’s high tackle on Falcons’ Sinoti Sinoti as the winger was in the act of scoring gifted the visitors a penalty try, while Savea’s yellow handed Newcastle half-back Joel Hodgson an attempt at the match-winning penalty, which was duly slotted.

Taofifenua’s effort sparked memories of Napolioni Nalaga’s 18-second try against the Scarlets in 2014, which remains the fastest ever try in European Champions Cup history.

Note: Taofifenua’s try was officially clocked at 22 seconds, but the clock shows that he crossed at 18 seconds and the referee blew his whistle at 19 seconds, so this was perhaps far closer to Nalaga’s effort than he is getting credit for.