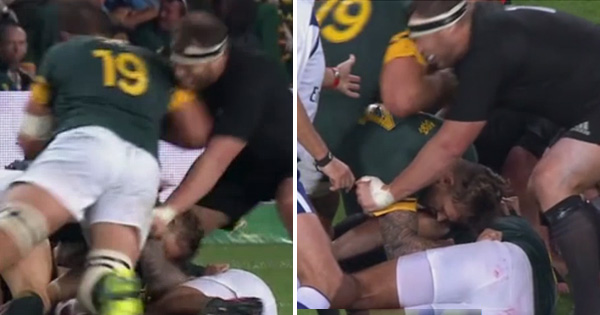 Springbok lock Lood de Jager has been suspended for a week after he was yellow carded for charging into a ruck against the All Blacks during Saturday’s 57-15 humiliation in Durban. De Jager pleaded guilty to the offence in a disciplinary hearing.

Late in the game the big second rower flew into a ruck in an effort to clear Wyatt Crockett, but went in too high and made contact with the All Black’s head or face.

Referee Jerome Garces issued a yellow card, and in the eight minutes that followed, New Zealand added another twenty points to their emphatic total.

De Jager contravened Law 10.4 (h) A player must not charge into a ruck or maul. Charging includes any contact made without use of the arms, or without grasping a player

“Having conducted a detailed review of all the available evidence including submissions from his legal representative, I accepted the player’s admission that he had committed an act of foul play contrary to law 10.4(h).

“With respect to sanction I deemed the act of foul play merited a low-end entry point of two weeks. However, taking into account mitigating factors including the player’s early plea and his excellent disciplinary record I reduced the suspension to a period of one week.

“The player accepted my indication of sanction of one week, and is therefore suspended from all forms of rugby up to and including 5 November 2016 when he is next scheduled to play.  The player is free to resume playing from 6 November 2016.”

Was a yellow card sufficient or do you agree with a one match ban?