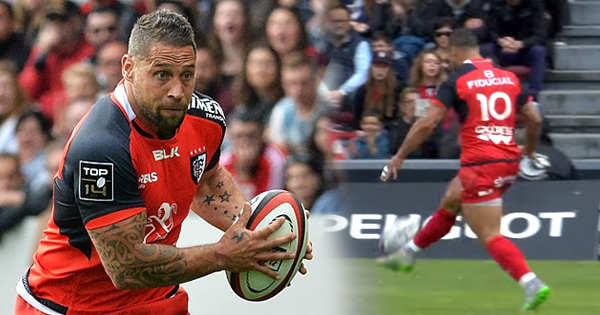 Toulouse eased past Agen with a commanding 52-19 victory on Sunday, helping them into the top six of the Top 14. While there were a number of good tries, flyhalf Luke McAlister showed two superb touches of class with neatly placed kicks for French centre Gael Fickou.

Starting early with a try by scrumhalf Sebastien Bezy, Toulouse went on to score a total of five first half tries, with Vincent Clerc, Louis Picamoles and Fickou also scoring.

Bezy added four conversions, before another three tries in the second half, as Gillian Galan scored twice and Corey Flynn also crossed as they racked up fifty.

Agen scored some consolation points through tries by Johann Sadie, Tamaz Mchelidze and Leka Tagotago, but Toulouse were never in any danger of being threatened.

Former All Black McAlister produced two stunning pieces of play, first with the neat kick over the defence with the outside of his boot, then a near carbon copy, except that time it was a sweet dink with the inside of the foot.

On both occassions Fickou got in perfect position to stroll over after the McAlister magic. Top skills and when executed well, a good way to get behind that defensive line.

You can watch the tries below and then below that we have full match highlights, and if you’d like to watch replays of both the tries, you can see also watch those on the second page here.