Luke Watson crosskick for the try 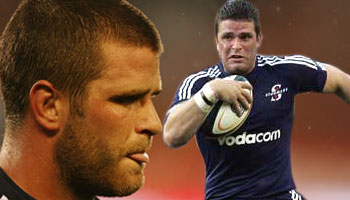 Luke Watson will be making his long awaited Springbok debut

vs Samoa this weekend at Ellis Park. His inclusion was totally against the coach Jake Whites choice. The young Stormers captain and the Bok coach have never seen eye to eye, and White swore that Watson would never play for the Boks while he’s coach. Political intervension has however taken over, and White was forced to include Luke in the team.

In all honesty, Watson being included in this manner is completely wrong. Government should never get involved in rugby selections. But, this is South Africa, and these things happen. Nevertheless, I think Watson is a great player who deserves a chance to wear the Green and Gold, and he will no doubt take the opportunity with both hands and will no doubt impress.

This clip is of a try The Stormers scored earlier in this years Super 14. Watson puts in a fantastic crosskick which is gathered by Gerrie Britz and then finished off by Corne Uys. Just another example of Watson’s all round skill.

Sidenote: Derick Hougaard will be making his return for the Boks this weekend. Luckily for him, ‘The Chiropractor’ Brian Lima is injured and won’t be taking the field for the Samoans.