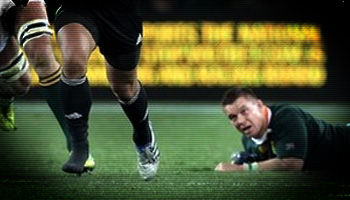 Thing didnt go quite as planned for John Smit this past weekend. Celebrating his 100th Test match, Smit and his side were on track for their first win of the Tri Nations, until Maa Nonu slipped the grasp of the Bok captain, leaving his boot as a souvenir before setting up Israel Dagg for the winning try.

The try was featured in the highlights a few days ago, but it was without replays and all the rest, so heres a longer version since there has been a lot of talk about the Smit missed tackle, and the fact that Nonus boot was left in his clutches.

Nonu – who for many years has been known as a superb tackle breaker but not a great distributor – then raced down field with only one boot on before delivering a pinpoint pass to replacement Dagg, who scored the decisive try with things tied up at 22-22, and 79 minutes on the clock.

Smit admitted to the error in the post match interview, and has since spoken out on the pain of the loss, and the feeling within the camp that it is only up to them to get out of the miserable hole theyve found themselves in during the tournament.

“You got to look at yourself and the mistakes. To lose a test in that manner was very emotional for me. Losing is one thing and I understand it. It doesnt mean I like it,” Smit said, before discussing the similarities between this year and the 2006 loss of form.

“It is important not to use 2006 as an excuse and be comfortable with it and then to think that in 2011 we will be as good as we were in 2007. That is the trap we cant fall into. In 2010 we have a much more experienced side that is getting beaten like this. Perhaps it is a high mileage thing where some players have had a bit too much rugby and their bodies are talking.

“Suspensions havent helped us either, and as much as we have excuses, we only have ourselves to blame. There is hurt and this weekend will highlight that. Weve felt this feeling before.

“It’s always hard talking after the game when you are the loser. To be honest, we had very little to take out of the first three games. This one we know if we are a little closer intensity we want every week, we know we can make any team ordinary.

“This is the team that is leading the way in world rugby and suddenly their passes went down and we were tackling them backwards. Suddenly we started to look like world champions again. Sunday I woke up and realised the biggest positive is that if we play right, we will win any game every time,” he said.

As for Nonu, hes in the form of his life and has finally silenced the critics, whether he’s playing with one boot or two.