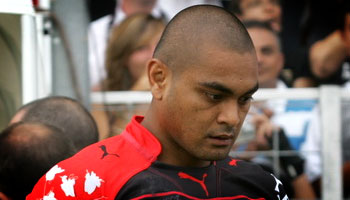 Toulon centre Mafileo Kefu was red carded within five minutes of kick off against Brive on the weekend as the two sides met in the Top 14, a match that ended with the big spending Toulon going down 27-9 at the Stade Amedee Domenech.

Australian Kefu was sent from the field just four minutes in after he was deemed to have made a dangerously high tackle on Brive fullback Palisson, who stayed down for some time after the tackle took place.

The ref conferred with his assistant, and then made the bold choice to send Kefu straight off, no doubt affecting the outcome of the match very early on. Palisson continued on after he recovered, and got his own back as he scored the last of three second half Brive tries.

The referee said afterwards that for him it was a clothesline, and he was supported by his touch judge who recommended that it was worth more than a yellow.

Kefu will face a disciplinary hearing on Thursday as it will be decided what his fate shall be. He has stated that he felt the tackle only warranted a yellow card, nothing more.

According to the leagues laws, he will face anything between two and fifty two weeks on the sideline.