Magali Harvey scores Try of the Tournament contender vs France 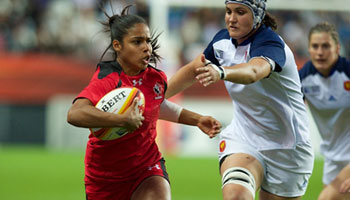 The Women’s Rugby World Cup Final between Canada and England kicks off shortly, so here’s a look at the unbelievable try that Magali Harvey scored in the semi-final against France. The flyer turned 24 just yesterday, and will be looking to celebrate in style in her country’s first ever final.

Canada have played in all of the Women’s Rugby World Cup’s, but had previously never placed better than 4th overall. Their victory over hosts France wouldn’t have been popular with the locals, but the manner in which Canada have played, and this try was scored, will ensure they have support in the final against England.

The two sides are evenly matched, having met in the group stages on August 5th, drawing 13-13.

This try is, dare we say it, Jason Robinson-esque, with that acceleration, balance and final step something to behold. As if sprinting 80 metres wasn’t enough, she then converted the kick too.