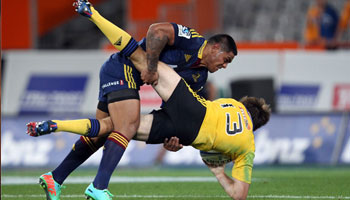 Round six of Super Rugby produced some great tries, as seen in yesterday’s Best Tries of the round video, but there were also some big tackles, and none better than this in the Highlanders vs Hurricanes clash at Forsyth Barr Stadium in Dunedin.

Conrad Smith recently notched up 100 games of Super Rugby, but it’s not getting any easier for the 32-year-old All Black, who was on the wrong end of this crunching tackle by Malakai Fekitoa.

Beauden Barrett, who finished off a great try in the game, flung a hospital pass to skipper Smith, which Fekitoa read well and took full advantage of. Crunch.

Some may say he took him in the air, and came close to lifting him illegally, but all in all it was a thumping hit and one that Smith won’t forget about in a hurry. He surely had words with Barrett.

The tackle helped to create the momentum that led to two Highlanders tries, to Phil Burleigh and Patrick Osborne, which effectively sealed the 35-31 Dunedin win.

As it’s bound to come up, do you think the tackle was 100% legal, or should have been penalised?