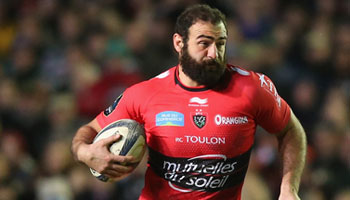 Steffon Armitage scored a hat-trick as Toulon stormed into the European Champions Cup quarter finals with a 60-22 victory over Ulster at the weekend. This great team try, finished off by Mamuka Gorgodze, was one of the best of the round.

Toulon now has a five point Pool 3 lead over Leicester, who themselves picked up a bonus point win as they beat Scarlets 40-23. The Tigers will need to win away at Ulster in the next round of play if they are to join Toulon in the last eight.

The tryfest featured an impressive hat-trick for flanker Armitage, whose heroics made no impact on England coach Stuart Lancaster, who left him out of the England training squad for the Six Nations.

The stunning try below, featuring some superb hands in the build up, was voted as Try of the Week in the official EPC Poll of the top tries from round five.