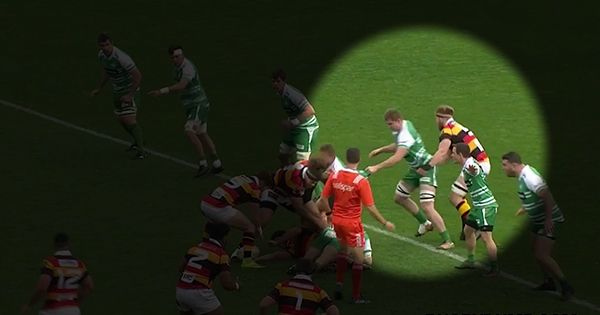 Manawatu Turbos lock Liam Hallam-Eames has felt the wrath of a disciplinary hearing, after not being spotted for a devastating back-hand strike less than a minute into their Mitre 10 Cup round one clash with Waikato on Saturday.

The Turbos lock was held back by James Tucker shortly after kick-off and retaliated by swinging his fist directly at the Waikato second rower’s face, resulting in a knock-out blow that somehow wasn’t picked up by the officials at the time.

Hallam-Eames therefore was free to play the rest of the contest, while Tucker went off for a mandatory Head Injury Assesment.

While the first offence was Tucker’s holding, there is obviously no place for lashing out like that in the game, so Hallam-Eames has been suspended for a total of four matches.

He was cited under law 9.12 for striking a player with his arm. New Zealand Rugby Duty Judicial Officer Chris Morris said it was a deliberate strike to the head of the opposition player who as a result was required to leave the field and failed a Head Injury Assessment (HIA).

Taking into account Hallam-Eames admission of guilt and clean record, Morris reduced the suspension from six to four matches.

Hallam-Eames’s suspension includes all rugby and means he will miss Manawatu’s matches against Taranaki, Otago, Canterbury and Northland and be available to return to play in Week Six of the Mitre 10 Cup.

In an ironic twist, Hallam-Eames will probably be replaced by Brad Tucker, the brother of James.

We’ve seen a number of similar incidents over the years, usually resulting in a ban for the retaliator, with the holding back offence clearly a difficult one to sanction.

That said, Hallam-Eames must have been bashing his head against the wall before taking to the field because he had a very short fuse here, striking Tucker after what could be described as very little provocation.