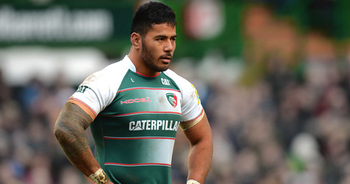 We’ve featured Manu Tuilagi regularly of late, as recently as last week after he made a punishing hit on Blair Cowan. There are calls for him to return to the England team, however Leicester Tigers boss Richard Cockerill says it’s still too early.

Tuilagi made his return to action a few weeks ago and has shown decent form. He was involved in another big tackle in that match, on Winston Stanley, however he was penalised for the hit.

Against Exeter Chiefs this past weekend Tuilagi was throwing himself about as usual, first with a cracking hit on fullback Phil Dollman, then an almighty tackle on England lock Geoff Parling.

Tuilagi also got himself a well taken first half try, and was in the pack for another.

Cockerill has said that he would rather keep the Samoan-born star for a bit longer, but understands that the decision ultimately lies with Eddie Jones and England Rugby.

“Manu did some good things today but I don’t think he is ready to play Test rugby. Even if you put him on the bench to be an impact player for the last half an hour, what happens if you have to put him on after five minutes?

“He is probably five or six games away from being fully fit to play 80 minutes of Test rugby,” Cockerill explained. “I’d love to keep him and look after him so we can manage his training week. At the moment he is not doing a full week’s training because we need to save his load for game day.

“In a Test environment it’s more difficult. Manu has still not played a huge amount of rugby after 15 months out of the game. He wants to be back in the mix. Whether that’s right is for me and Eddie to have a discussion but, ultimately, it will be England’s decision.”

Exeter picked up a crucial losing bonus point, but the home side won 31-27 at Welford Road.