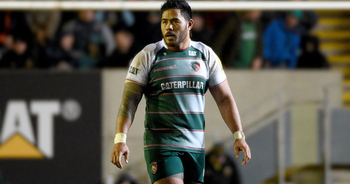 Manu Tuilagi made his long awaited return to action following a lengthy injury spell that included him being unavailable for the World Cup (disciplinary issues aside). He made this thumping tackle on his return, during Leicester Tiger’s 30-27 victory over Northampton Saints.

The former England back has been out of action for 15 months with a groin injury but made his return after 52 minutes of the Aviva Premiership clash at the weekend.

Timing is decent as new England coach Eddie Jones will name his Six Nations squad on Wednesday, however Tigers boss Richard Cokerill doesn’t feel Tuilagi is quite ready for Test rugby just yet.

“Manu will keep improving but the start of the Six Nations is unrealistic because we need to make sure he is 100 percent right,” Cockerill has told the BBC.

“As soon as he’s fit and good to go, he can go and play for England and do what he does but at this point he’s Leicester’s player, we’ve looked after him for a long time to get him fit, and I’m not going to push him through to play Test matches now.”

While Tuilagi himself said that he wasn’t available for the RWC last year due to injury, then coach Stuart Lancaster axed him due to his arrest for assaulting females police officers in April.

Tigers and indeed England fans will be pleased that he is back though, and will have fingers crossed that he not only stays injury free, but remains squeaky clean both on and off the pitch.

For some trademark huge hits from both players, see the Related Posts below this video