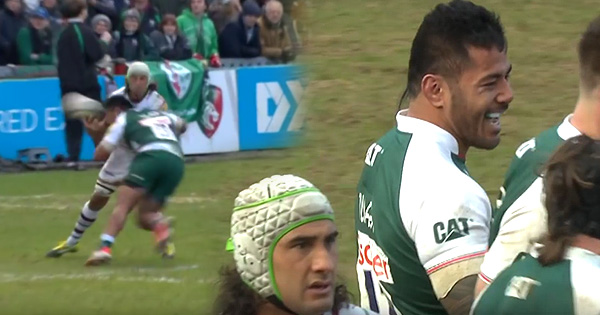 Leicester Tigers centre Manu Tuilagi made a return to the Premiership recently, leading to him being called up to the England training squad. He put in a solid performance against London Irish this past weekend, including a tackle that Blair Cowan wasn’t too pleased with.

Cowan, the New Zealand born Scotland forward, had just returned to the Premiership himself following disappointment against Wales in the Six Nations, when Jamie Roberts knocked him out with a big tackle.

Receiving a bit of a hospital-pass with Tuilagi lurking would have been the last thing he wanted.

On his return to the Premiership, 24-year-old Tuilagi made a controversial tackle on Winston Stanley, but played reasonably well and was happy to be back playing again.

The England back then contributed to Tigers’ 47-20 win this past weekend with some nice touches, the likes of which would have impressed midfield partner Jean de Villiers, the Springbok captain who scored a try on his Leicester Tigers home debut.

“Whether he starts or you bring him on for 20 minutes, he will make a big impact and England are better off [for having him]. The balance of the side is so much better with someone like him there.”

Tuilagi last played for England in June 2014 against New Zealand, but could make a welcome return against Wales when the two sides meet in a crucial Six Nations clash on March 12th.

View the tackle above, and highlights of the seven-try demolition of London Irish below