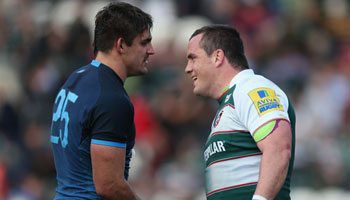 Argentina scored nine tries to beat Leicester Tigers 55-34 in a Rugby World Cup warm-up match, that also served as a testimonial  for Marcos Ayerza. The veteran prop played for both teams on the day, much to the delight of the Welford Road faithful.

Both sides ran the ball from all corners and there were some fantastic tries scored, as well as a few thumping tackles, as can be seen in these highlights from Leicester Tigers. The match was only televised in Argentina, so this inhouse footage is much appreciated.

Ayerza represented the Tigers for a mammoth nine years, seeing him play 214 games and winning four Premiership titles along the way. The 32-year-old started at loosehead prop for Los Pumas, before ending the match amongst club teammates, in the Tigers’ front row.

“Marcos is a fantastic player, one of the world’s best props,” said Richard Cockerill. “He’s a true gentleman, he’s a one-club man, he loves his rugby and Leicester Tigers. I have nothing but admiration for him.

“He was very emotional at the end, he prides himself on his family and his rugby, and Leicester is part of his extended family now. You like to see that emotional attachment with the club, I think that is important.”

One of the best tries of the day was scored by Tigers academy wing Paolo Odogwu, who impressed coach Cockerill. “Paolo’s try was as good as you will see from a young wing.

“He’s come through our system at the academy, he’s had a first opportunity today and he has taken his try very well. Finishing from 60 metres on your debut is a good start!”

Argentina face New Zealand in their opening game of the World Cup, in Pool C.