Mark Richards KO'd after colliding with the shoulder of Willem Alberts 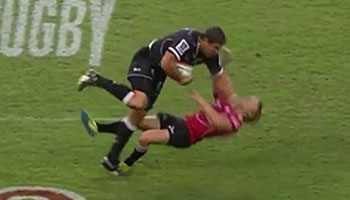 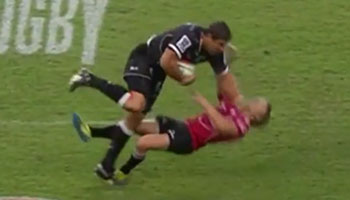 Making his debut for the Lions in Round 9 of Super Rugby this weekend, winger Mark Richards’ evening ended early when he was left unconscious after taking a heavy knock from Sharks flanker, Willem Alberts.

Richards, a recognised success in sevens, was making his first appearance for the Lions since his return to 15-a-side rugby. Unfortunately the night didn’t end as he, or many of the excited home fans, would have liked.

Lions’ scrum-half Faf de Klerk chipped the ball over, but it bounced up awkwardly, as rugby balls so often do, and with credit to Richards for his commitment he kept his eyes locked on regaining possession.

Due to this however, he was unaware of Sharks’ openside Alberts bearing down from the opposite direction with a similar desire to poach the ball from the air.

Alberts won the race, and after gathering in possession he continued to motor toward the approaching Richards, who was entirely unprepared to make a tackle as he had been hoping to have the ball himself.

The resulting collision sent the Lions’ winger, who weighs 6 stone less than Alberts, down to the turf with a sickening thud.

The officials and medical staff were extremely quick to react and play was stopped as all safety precuations were observed to ensure Richards safety was paramount.

After a lengthy delay the brave winger was stretchered from the pitch, but thankfully was seen up and about on the sidelines during the second half.

Richards will take solace in the fact that the Lions extended their Super Rugby winning streak to four, after the final whistle left the Sharks trailing 21-23 on the night.

Alberts is well known for his aggression and powerful play, and in fact put in a monstrous hit on Jaco Taute in the same Super Rugby encounter back in 2010.